This Holiday Season 2018 is certainly shaping up to be an interesting one, not only across North America, but across many international markets. Some retailers are opening new doors and revealing creative options with pop-up shops, stores-within-stores, a diverse product mix and increased toy department footprints.

The resurgence of FAO Schwarz Stores across the USA is a perfect example. The new 20,000 square foot Flagship store opened in New York City, at Rockefeller Center, on November 16th, 2018, with a great expected fanfare.  The store is an experiential, featuring FAO’s iconic life-size piano, magic shows, a baby adoption center, a grocery-shopping area for kids, and a station to construct a remote-controlled car.

Airport FAO Schwarz locations will be included in Hudson Airport shops, across the USA, with the first location at LGA Airport in New York. The well-respected David Niggli, the original buyer for the iconic and original FAO Schwarz stores, is back in the buyer’s seat, and it is expected that his well-honed experience will continue to steer the product selections. An FAO Schwarz international pop-up has opened in Selfridges, in the UK, and although it just recently opened, reports are that it is expected to fare well for its first UK Holiday season. FAO is also planning to open pop-up shops in department stores across the world, including Hudson’s Bay in Canada, Myer Australia in Australia, and El Corte Ingles in Spain. Another full store will open in Beijing, China, in 2019 in partnership with Kidsland China, and is expected to occupy 27, 000 square feet.

Mass market retailers have increased their toy footprints for the fourth quarter, adding more toy categories, and building depth within certain thriving categories. They have stepped up their exclusive retailer offerings in order to grab consumer’s attention and drive traffic to their toy departments.

The multinational retail corporation Walmart has partnered with key manufacturers to ensure foot traffic in their toy departments, by offering exclusive merchandise. The retail giant announced in early September that it would expand its toy assortment by 30% in stores and 40% online this Holiday season. Walmart also introduced a new collectibles section in the entertainment department of more than 3,500 stores starting from mid-October. This new destination will features exclusive brick-and-mortar merchandise from the subscription service Loot Crate for collectors.

The department store retailer Target has expanded their home delivery shipments and their click-and-collect features, driving quicker product delivery to consumers.  Their recent purchase of a 3rd party shipment fulfillment service, Ship is driving this new delivery service. The acquisition will accelerate Target’s digital fulfillment efforts, bringing same-day delivery services to approximately half of Target stores by 2018. The service is now offered from the majority of Target stores, and in all major markets. By the end of 2019, same-day delivery will include all major product categories at Target. Target stores have also re-vamped their in-store toy department footprint, and increased selections in their Adult Games section, collectible toys, and more.

Specialty retailers and department stores are broadening their mix

Nordstrom Department Stores has added a range of specialty type products, such as special LEGO exclusives and selections from the Tech Will Save Us portfolio of relevant, hands-on tech projects that inspire kids and delight their gift-givers.

Some stores in the Learning Express franchise have reported an uptick in sales of collectibles, tangibles (think slime offerings, compounds and putty), Harry Potter merchandise, and more. With Kid Focus (a division of MGA Entertainment, USA) now offering L.O.L. Surprise and other highly coveted brands, specialty stores are reporting an unexpected early lift in holiday sales.

Amazon has gone old school, and has released its first Holiday printed catalog, with an expanded Toy, Game, Tech Toys and STEM Toys range of products. The e-commerce giant made $4.5 billion in U.S. toy sales during 2017, up 12% over 2016, according to One Click Retail. In comparison, for the same 2016 annual time period, Amazon grew in the UK, 10% YoY; in Germany, 42% YoY; and in France, 78% YoY.

eBay has launched Toytopia, as a new section of its site dedicated to toys for the holiday season. Toytopia claims to include millions of toys for all ages, including action figures, dolls, STEM toys, family games, trains, and more. According to eBay, they have more than 1 billion listings and 175 million buyers worldwide. They claim that eighty-one percent of eBay merchandise is new, and 89 percent of items are “buy it now,” with no bidding required. They are making a big play for more of the online market dollars.

Even Toys R Us private label branded goods, marketed under the brands of Journey Girls, Animal Zone and Imaginarium are re-surfacing at retail stores such as Krogers (they have 600 nationwide USA locations) for Holiday 2018. This Geoffrey Toy product range is spear-headed by Richard Barry, the ex-Toys R Us executive, and his team, who have re-imagined these once-exclusive Toys R Us brands and are offering them as continuing brands for consumers across America.

Franchises such as Five Below, Party City and Hobby Town have increased their toy departments and even Farm and Fleet stores: Blain, Fred Meyer’s and Meyers have re-energized their offerings, in the wake of a new retail expansion.

All in all many new retail models have emerged. Retailers are devoting more shelf space than ever to toys as they compete for a bigger chunk of sales.

Visit the Toy Business Forum at the Spielwarenmesse® 2019. Reyne Rice shares a whirlwind view of the newest trends and products found across the toys, games and technology spectrum, as we enter 2019, and beyond. Listen to her at 1 p.m. on Wednesday, 30 January 2019. Read the program of the Toy Business Forum.

Check out these great ideas for toys in 2018! 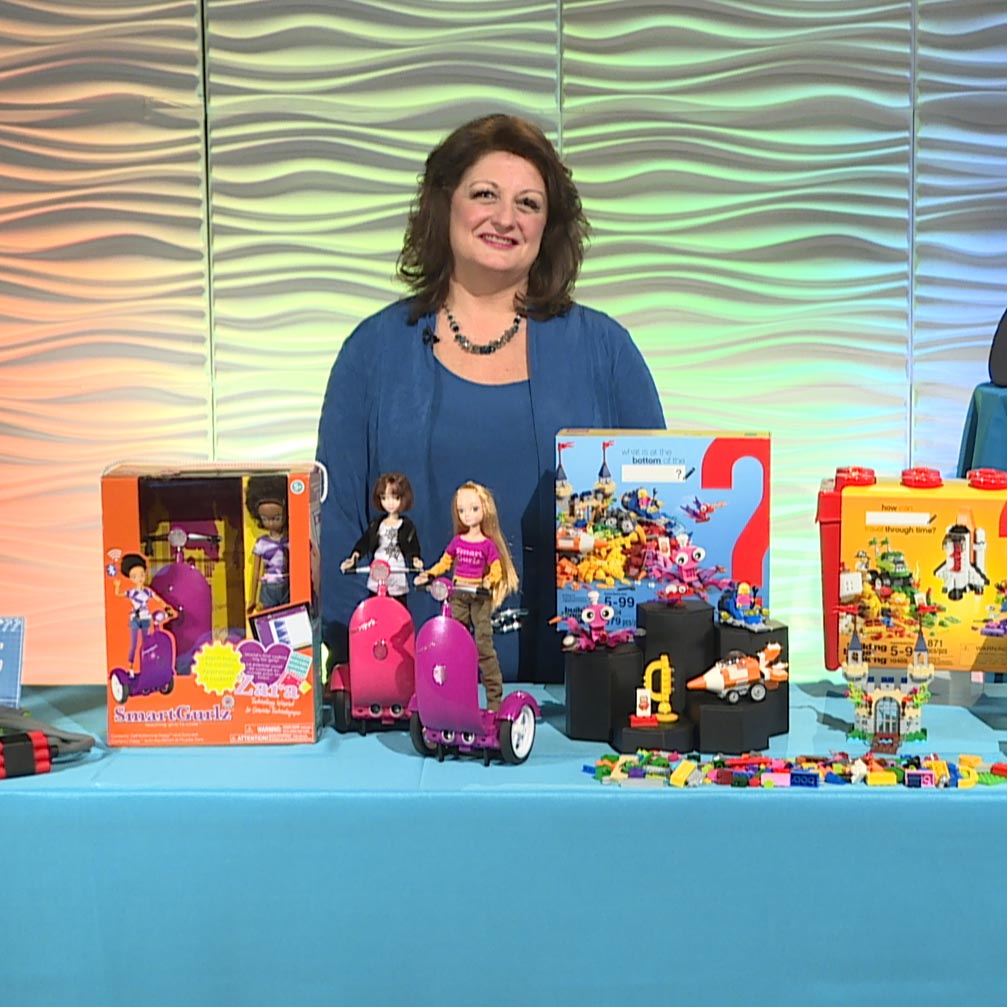 Reyne Rice is back at the Toy Fair in NYC with this year’s hottest trends! 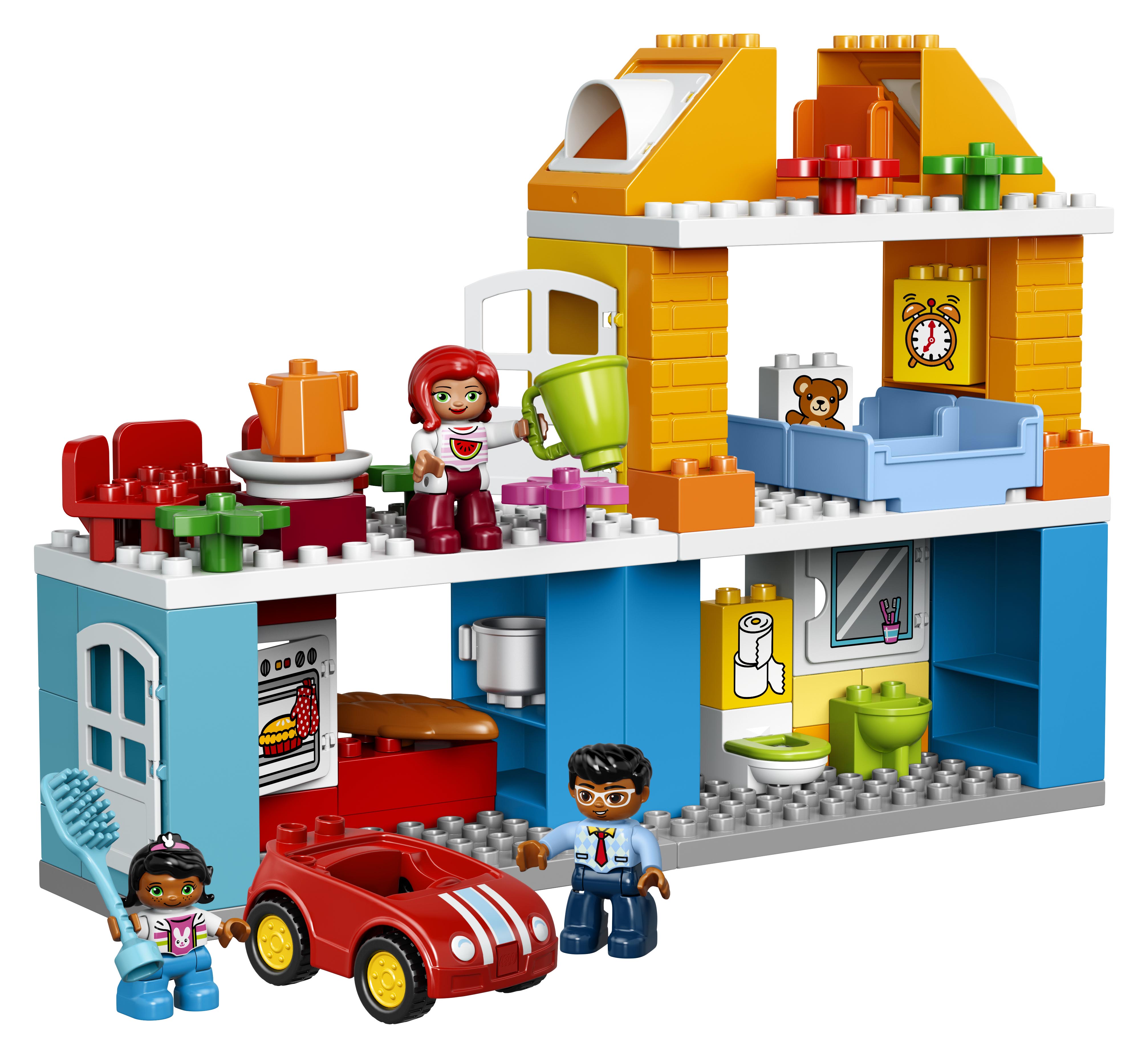 Lego adds fun to playing and taps into our imaginations! The LEGO brick is turning 60 this year and to celebrate, they have created five LEGO 60th Anniversary “What Will You Build?” sets, designed to inspire creativity and open-ended building. The boxes are colorful and filled with classic bricks, special elements and mini-figures. LEGO is a timeless, nostalgic toy that brings parents back to their childhood and connects them with their own kids. By focusing on Bigger Thinking, kids will build self-confidence with fun. No rules, just play, explore and discover. AND, in April, the Mini-figures celebrate their 40th anniversary~ Click here to learn more. 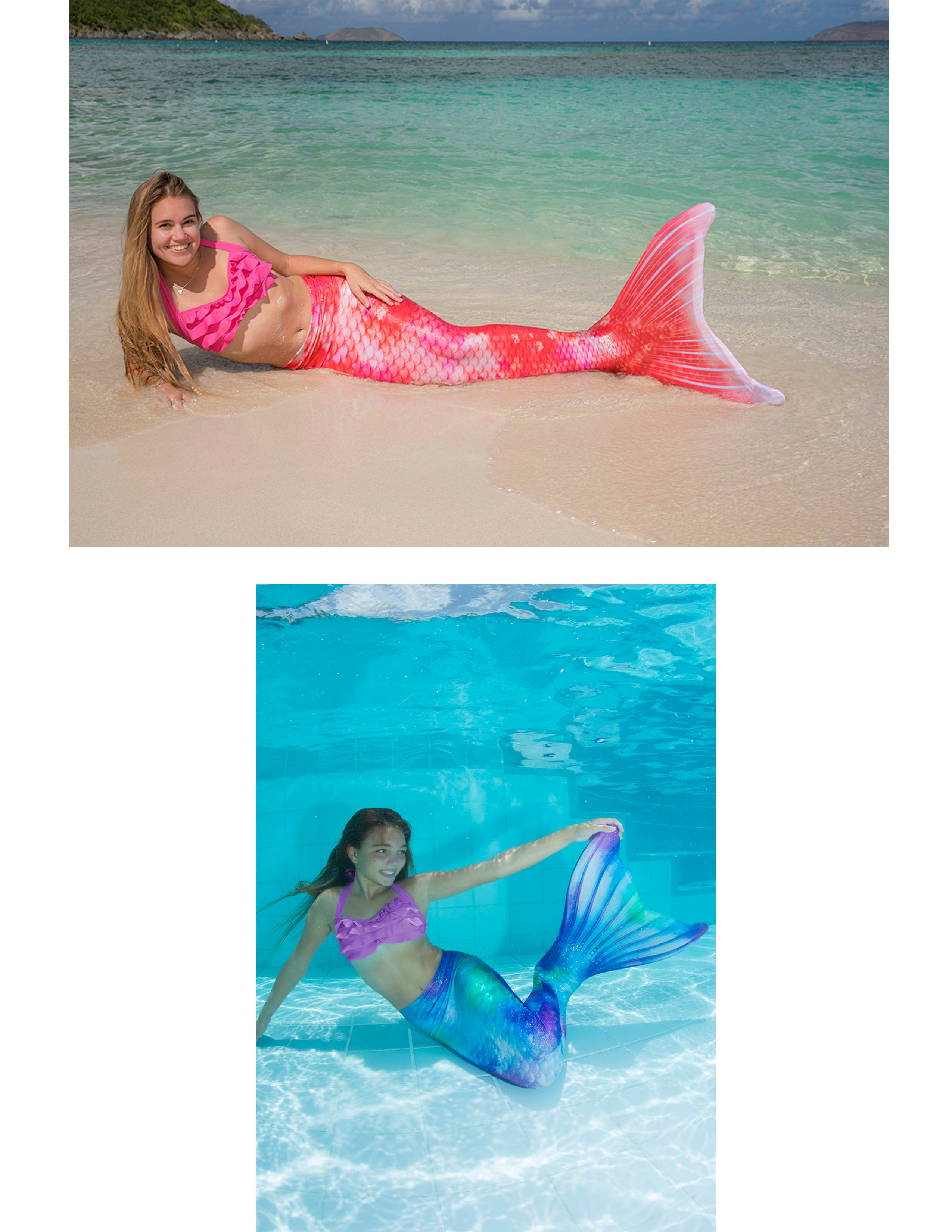 Kids can explore their dreams, while learning swimming skills with Fin Fun’s Mermaid Tails that let kids swim like real mermaids. The quality of these tails are spectacular, and Fin Fun offers a 60-day Tail Tip Guarantee. The patented monofins are inserted into the tail and the quick-release design, lets you remove the tail with just a tug and a kick of the feet. Mermaid tails are recommended for competent swimmers 6 years and older, and ONLY with adult supervision. Adults can wear them too! Coral Cloud is a NEW Limited Edition color and Mariana’s Tidal Wave is a consistent best seller. Click here to learn more. 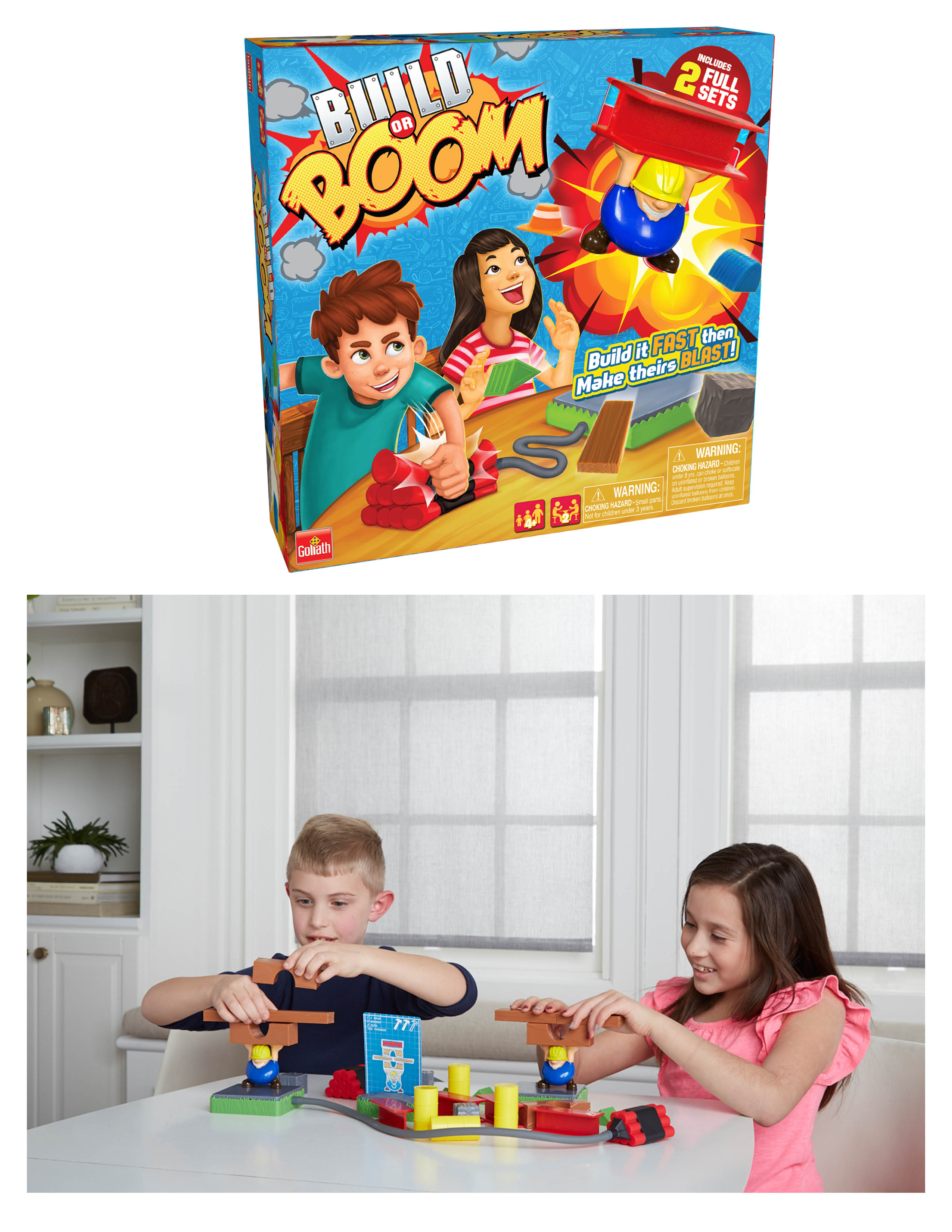 Are you looking for a fun game that challenges your kids? Build OR Boom by Goliath Games encourages kids, ages 4 and up, to hone their STEM skills. Each child sees who can be the first to bring the blueprint cards to life. Kids work on their own platform, quickly but carefully, to match the blueprint. Be the first one to finish, then SMASH the boomer and demolish the other players’ building to win the round. Driven by kids’ imagination and parents will love that no batteries are required. Click here to learn more. 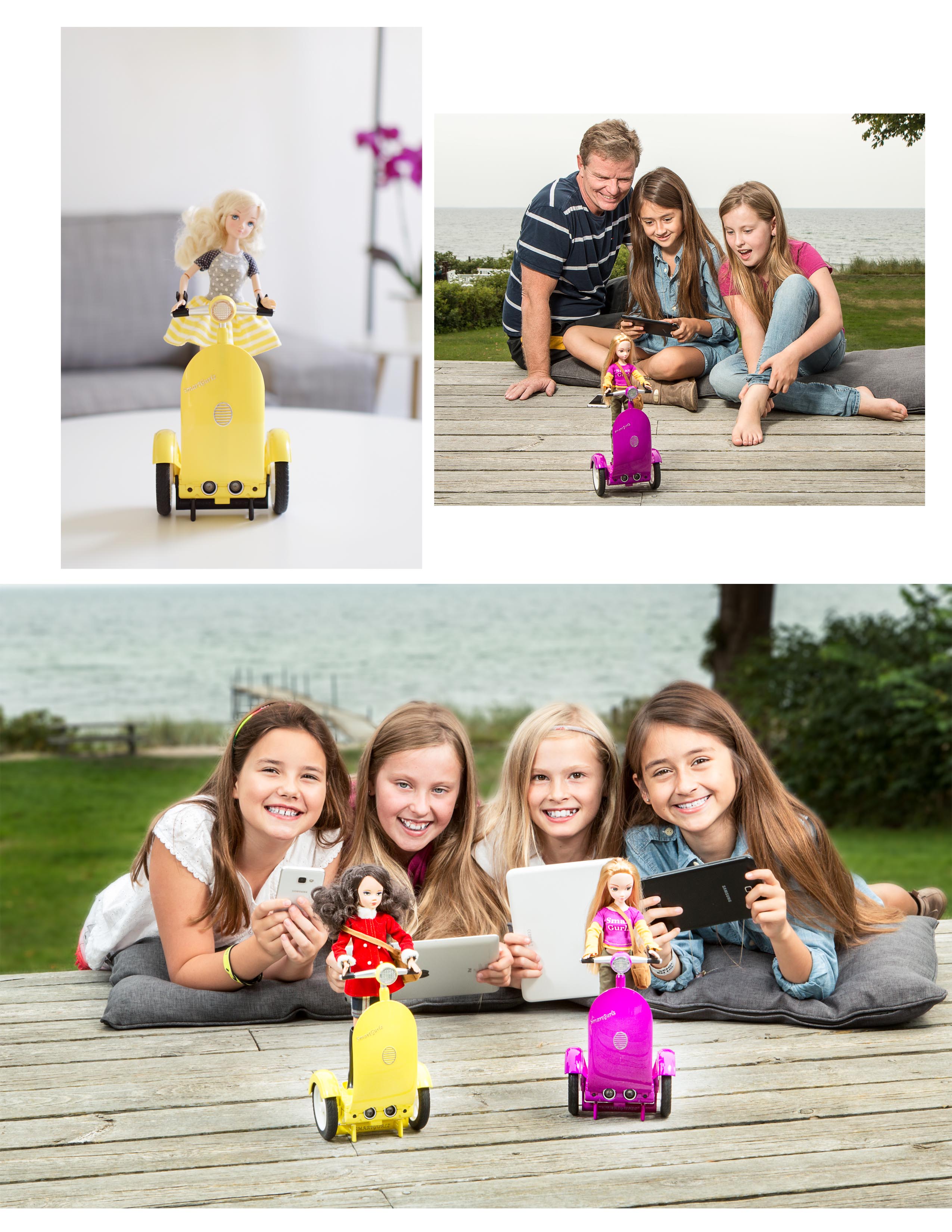 Smartgurlz is a line of Award winning, self-balancing robots and action dolls that teaches girls to code. As Seen on Shark Tank, just connect your smartphone or tablet to the E-Learning app and give your daughter STEM confidence and provide loads of fun. Watch your robot roll across the room, perform dance moves or play learning games. The app includes missions, books and a step-by-step tutorial on how to code! Click here to learn more.

CES 2018, as a judge and awards presenter at the Kids at Play Awards Ceremony, in Las Vegas, Jan 2018 @ToyTrendExpert, @LIDTEvents.  Review all of the award winning tech for kids products at www.KapiAwards.com.

Selected each year, from hundreds of entries and new Tech products, designed for kids, ages birth to 14 years. The esteemed international judges review and debate the best of the best across multiple categories. This year’s winners include new-comers and veterans. See the list below and go to www.kapiawards.com for photos and more information, on each product.

Honorable Mentions go to Elfkin for creating a personal robot that includes a voice-activated messaging system that’s safe for young children and Dynepic for iOkids, a woman, and veteran owned company, creating an aggregated safe entertainment environment for kids.

What are the KAPi Awards? The 9th Annual KAPi (Kids at Play Interactive) Awards celebrates excellence in children’s media, presenting awards to some of the most deserving people and products in the kids’ tech industry. The KAPi prize identifies children’s technology products that raise the bar for innovation and excellence during the past 12 months.

Who selects the winners? Our panel of distinguished judges, representing all facets of the kids’ media business, engage in a series of conversations via phone and email to determine what the characteristics of good kids’ digital play should be and which nominated products are most deserving. http://kapiawards.com/faq-2/

Additional inquiries should be sent to: